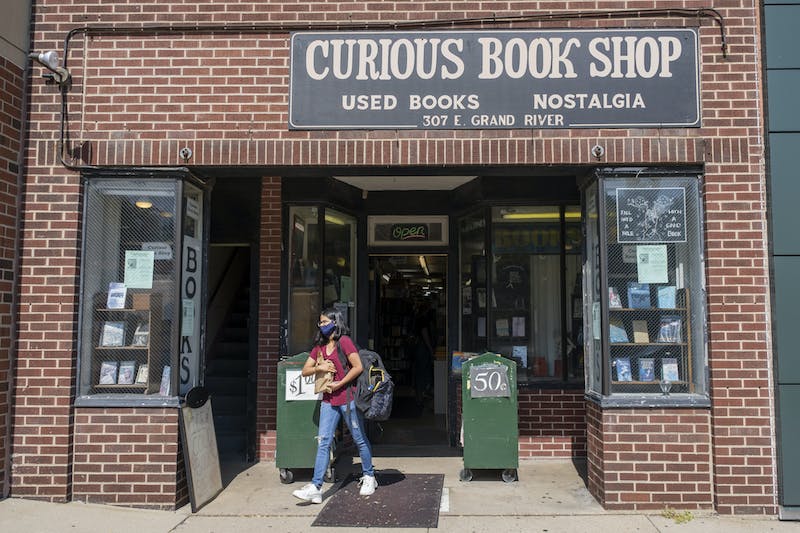 Surviving 2 pandemics: how Curious Book Shop lasted thanks to the advent of the internet and COVID-19

By Thelma B. KidneySeptember 15, 2021No Comments

Nestled between the various restaurants, bars and clothing stores of Grand River Avenue is a local business that has managed to keep its doors open for over 50 years: Curious Book Shop.

Owner Ray Walsh was a student when he started selling books in his garage in 1969. Two years later, Walsh graduated from Michigan State University with a degree in communications.

After a few years in his garage and a few more in the basement of the old Paramount News Center, Walsh and Curious Book Shop found a permanent home at 307 E. Grand River Ave. in 1973.

Fourteen years later, Walsh opened an associated bookstore just down the street: Archives, which is also still in business.

In addition to his bookstores, Walsh is active in the Lansing community, as a member of the East Lansing Town Center Management Board. He also wrote book reviews for the Lansing State Journal for over 30 years.

When the internet started to gain traction in the late 90s and early 2000s, online shopping sites like Amazon and eBay began to change the way books were bought.

“It was increased competition,” Walsh said. “Certainly this has changed the book market because many prices have come down as people realize how many copies of these books are available across the country. On the other hand, some of the really beautiful books – the outstanding books by Hemingway, Faulkner, Steinbeck, Fitzgerald, early editions and jackets – have grown considerably.

As the book market changed, Curious Book Shop has adapted. Walsh began using mail order services, Amazon, and other online book databases to keep up with the competition. The store’s Etsy site accounts for a large portion of online income. With over 600 items listed, the profile makes daily sales.

Curious Book Shop has managed to adapt and thrive in the internet age, but COVID-19 presented a unique threat. Waves of closures closed non-essential businesses in late March 2020, forcing most physical stores to temporarily close.

But Walsh’s employees weren’t ready to give up.

They devised a plan: a GoFundMe fundraiser.

“When we had the campaign, I never thought I would do something like this,” Walsh said. “But my employees suggested it, and I said, ‘OK.’ We set a goal that wasn’t realistic. But we thought why not give it a try and see what happens. ”

Typically, a contributor to a campaign on GoFundMe receives a thank you email. Curious Book Shop did it differently.

If a contribution exceeded ten dollars, the store offered a handful of random books of the contributor’s preferred genre. Walsh said the store sent more than 200 packages during the campaign.

The store’s campaign began to gain traction, eventually receiving mention in a Buzzfeed article about bookstores running similar campaigns across the country. Curious Book Shop was one of 35 stores mentioned in the article, which resulted in donations and contacts from alumni and former customers across the country.

Do you want the news without having to search for it?
Sign up for our morning newsletter. That’s all your friends talk about and then some. And it’s free!

“We really appreciate the support from the community and I’m fortunate to have a staff that works hard and does a good job doing this kind of thing,” said Walsh. “Nobody expected something like this.”

Despite the bumps in the road, Curious Book Shop continues to be a local favorite, especially among incoming and outgoing Michigan students.

“I think part of that has to do with the character of the store,” said Abigail Rhoades, new employee and customer of Curious Book Shop. “It’s very eccentric, it’s a bit crowded, but that’s what makes it so charming.”

“The types of books you get here are very different,” said Aria Muchhal, a second-year genomics and molecular genetics student. “You want older books or a specific type of book or you just want to browse a section. The feeling that a bookstore has, the smell of old books and all, is great.”

There is a constant stream of new reading, as Walsh buys collections and regularly receives donations.

“Our inventory is growing,” Walsh said. “Sometimes when I turn off the lights at night, there are more books in the morning.”

With the amount of new inventory available through collections and donations, Walsh said he likes to be a bit selective with the books he acquires, focusing on a few genres that seem to resonate with students. Agriculture, physics and other popular university subjects are often in stock.

Walsh’s unique collection of books is often the primary source of attraction for loyal customers and first-time visitors.

“Local bookstores seem to have better collections,” said Ilayda Korkmaz, a second-year biochemistry and molecular biology student. “In fact, they picked the right books instead of all the books like there are in department stores.”

This article is part of our printed September 14 issue. View the full issue here.

Share and discuss “Surviving 2 pandemics: how Curious Book Shop lasted thanks to the advent of the Internet and COVID-19” on social networks.